The Past Twelve Months

Wow! I can not believe that it has been almost a full year since I last posted to this blog. I never really left the blogging scene as I have been reading many of the blogs I follow; I just haven’t been contributing. Sorry. It is through the great contributions of others that I find myself drawn back to Codex Deano.

While very little has changed in my professional life, my personal life has gone through several major shifts. For starters my crippling back and foot pains are completely gone. This was achieved with zero help from any doctors and no help from my now-cancelled gym membership (see previous post.) My hamstring muscles had shortened due to an almost constant state of sitting. Sitting in a car for two hours a day and then sitting at a desk for eight hours a day, followed by a couple more hours of sitting down with my kids to help them with their homework every night was (literally) killing me.

For those unfamiliar with the effects of long-term sitting I highly recommend reading this:

After raising my desk to a standing position (yes, I stand at my desk all day long) all the pain and symptoms went away within a week. I recommend this to everyone who has the physical ability to do it. 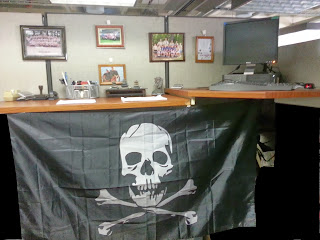 In other areas, about the time of my last post in November of 2012 I received an e-mail from a new employee by the name of Michelle who wanted to add a new nutrition component to our department’s Green Initiatives Framework (think of a green-team on steroids.) She wanted to introduce people to “plant-based nutrition.” I started out just helping her present her presentations and with setting up some A/V equipment but became slowly engrossed. As an environmentalist I’ve always agreed that a non-meat diet is the healthiest thing for our environment, but I did love a good cheeseburger or two, or three, or occasionally even four times a week. Her approach was a little different though. Instead of trying to inspire and persuade us, she simple provided a year long series of lunch-time lectures which included You-Tube videos of medical doctors giving cold, hard data. This was pure tactical genius on her part seeing she was presenting to a building full of scientists. After watching the evidence they (we) all took off to do our own research and try to dispel what we had just watched. All we found was more evidence backing up the facts Michelle had presented. I don’t think I can put into words how I became a vegetarian over the past 12 months, or how I am now standing on the very edge of veganism, but it all feels right.

The first changes came when I cut-out red meat in July and replaced it with rice, nuts, legumes, & beans: my hair and fingernails began growing faster.  A lot faster.  By the beginning of autumn I had given up all meat. I’ve been dropping about a pound a day while I’ve actually been eating (calorie wise) WAY MORE FOOD. My cholesterol has managed to drop 90 points this year. The last part of the challenge is cutting out the dairy. It was easy giving up the eggs and milk because I never really liked them anyway, but cheese is in almost everything I used to eat. Going just one week without cheese gave me my first break in my chronic rhinitis in almost nine years! I could smell things that I had not smelled in almost a decade! Like the pine trees in my back yard, the fall leaves on the ground, and that nasty moldy shower curtain I was completely unaware of. I never realized how a dark maroon shower curtain could work against me. I replaced it immediately of course.

The two videos that set me on this path and changed my life are from Dr. Michael Gregor and can be found here:

The Leading Causes of Death (2012)
http://m.youtube.com/watch?v=30gEiweaAVQ&desktop_uri=%2Fwatch%3Fv%3D30gEiweaAVQ

I was so inspired that I joined Michelle on a trip to Massachusetts last month for the Boston Vegetarian Festival where we met with Dr. Gregor in person. It was a blast and I can't wait to go next year. 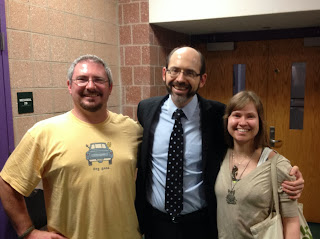 I owe my new found health and happiness to my coworker and vegan coach, Michelle. Without Michelle’s guidance I would have continued to shrug off vegetarian and vegan diets as “extreme.” But thanks to her I’ve discovered that a plant-based diet is a lot less extreme than a heart attack, diabetes, or open heart surgery. A serious blow was dealt to my potential progress when Michelle came to me and said, “I’ve moving to California.” After all she’s done for me and the other here at work, she packed up her gold Prius (nicknamed Rose) and headed west two days ago. I’m guessing that she is somewhere in Colorado right now. I’m doing my best to keep it together and not fall to pieces. She decided to follower her passions, head west, and become a full time plant-based nutritionist. You can follow her cross country vegan restaurant-hopping exploits here: https://twitter.com/lovestobevegan On a less personal note I have been elected the VP of Education for my Toastmaster club and became an Assistant Scout Master (ASM.) I have a fair handle on the VP of Ed position, but the whole ASM thing completely eludes me. I have no idea what I’m doing. I guess that’s another area I’ll be doing my best to keep it together and not fall to pieces. If nothing else it will be fodder for some interesting future blog posts.
Posted by Deano at 12:21 PM